The Squeak VMProfiler is now available headless in Pharo.
It allows you to profile an expression and get detailed statistics about where the time was spent on the VM side (JIT, interpreter, GC).

It is still in development so feel free to use it and report any bugs. Suggestions and comments are welcome !

First, you need to load the project in a Pharo 6 image.
Make sure you are using one of the latest VM, as the profiler uses plugins that were not in the older ones. You can download the latest VM+image using this script :

Then, you can either load the VMProfiler from the calatog browser (World Menu>Tools>Catalog browser) and install the stable version :

Or use the script below :

When the configuration is loaded, a workspace should open :

It basically shows you how to use the profiler :
Try and inspect the example from the workspace : you will see the profiling report displayed on screen.

If you want to test it with your own expression, then just type :


and inspect it. As the profiler is cadenced at 1.3 GHz, make sure your expression runs for quite a long time to actually get a large amount of samples, otherwise the results may not be significant. 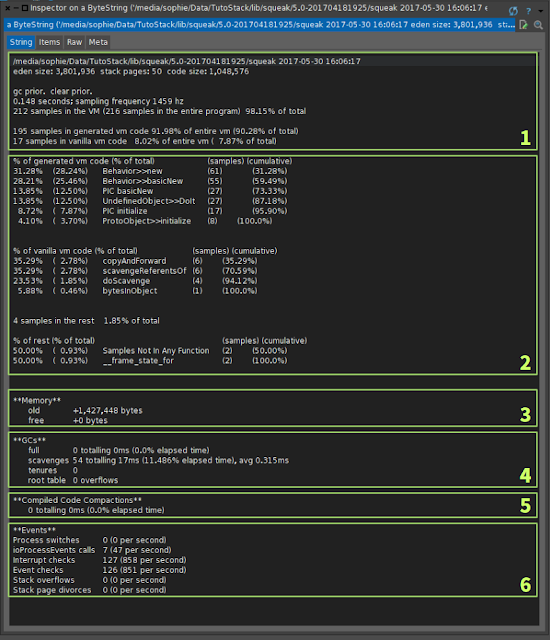 The report is composed of different parts :

1- General informations about the profiling

2- The profiling report in itself

3- Statistics about the memory


This part deals with the state of the memory after the profiling. It helps detecting potential memory leaks.

4- Statistics about the Garbage collection(s)

This part lists the operations performed by the garbage collector during the profiling. It can help identifying where to tune the GC, especially when a large (and potentially abnormal) amount of time is spent in one of these operations.

Like the previous parts, this part identifies other events that can occur during the profiling and can help you identify if something is wrong.
For instance, the size or the number of stack pages can be modified if a high amount of stack overflows is observed.


As mentioned in my GSoC proposal, there are still plenty of things to do !

First, in the next few weeks, the profiling should get more detailed as the in-development JIT and its speculative inlining will require the mapping of the profiling samples to a range of bytecode to actually get a significant profiling.